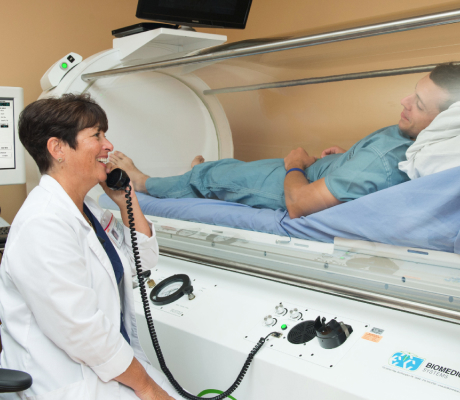 The following are the most commonly treated indications for HBOT. For the complete appropriate treatment protocol for each application, please sign up for one of the Primary Hyperbaric Medicine courses hosted by LST, or refer to the extensive literature available.

Diabetic foot wounds account for over 50% of lower extremity amputations in the US. A multi- disciplinary approach to wound care for these patients is imperative for optimal outcome. Clinicians must identify and manage these patients, using standardized protocols and an ever growing array of wound care technologies to improve healing. Hyperbaric oxygen therapy (HBOT) has long been utilized as adjunctive treatment with standard wound care. In patients with Wagner Grade 3 or 4 diabetic ulcers, adjunctive HBOT should be regarded as an AHA Class I intervention.

HBOT ameliorates hypoxia usually present with impaired vascularization of tissue that surrounds the wound, which is crucial to the wound repair process. Cells are dependent on enhanced oxygenation – like improved leukocyte function for bacterial killing and antibiotic potentiation, and that may persist even after completion of the prescribed round of HBOT.

HBOT ameliorates hypoxia usually present with impaired vascularization of tissue that surrounds the wound, which is crucial to the wound repair process. Cells are dependent on enhanced oxygenation – like improved leukocyte function for bacterial killing and antibiotic potentiation, and that may persist even after completion of the prescribed round of HBOT.

Hyperbaric oxygen is well researched for the treatment of delayed radiation injuries. Both soft tissue and bone necrosis present a common clinical problem after cancer radiation. It is imperative to recognize the character of delayed radiation injury, the purpose of HBOT for this indication, clinical results, and the correlation of hyperbaric oxygen and cancer development. HBOT has been shown to be beneficial because it stimulates angiogenesis while reducing fibrosis, and it mobilizes stem cells.

Normal, healthy tissue does not require hyperbaric oxygen therapy for reconstructive grafts or flaps. In compromised tissues – damaged by irradiation or impaired by decreased perfusion or hypoxia – research supports application of HBOT in flap salvage. Hyperbaric oxygen reduces the need for re-grafting by maximizing the viability of grafted tissue. Proper patient selection is essential for a positive outcome.

A bony infection which will not heal or recurs with standard therapy is deemed refractory osteomyelitis. These infections can range from relatively simple extremity osteomyelitis to cases involving the spine, skull, sternum and bony structures associated with high morbidity or mortality. Prior to surgical debridement, patients may be considered for supportive HBOT for optimal outcome. Osteomyelitis in the subset of patients with associated Wagner Grade 3 or 4 diabetic ulcers calls for adjunctive HBOT as an AHA Class I intervention.

CO poisoning affects the major organs, particularly brain and heart. This is due to a complex cascade of biochemical events which can cause neurological and cognitive deficits, coma, or even death. Emergency room diagnostics in suspected cases of carbon monoxide involvement usually include lab tests for carboxyhemoglobin, and first treatment is generally oronasal oxygen at ambient pressure. Lab results do often not reflect the actual severity of impending cognitive problems.

Neurological deficits are a short term as well as long term concern. Extensive research has shown that central nervous system (CNS) injuries can only be treated with HBOT, and not with surface pressure O2. The amelioration of the cognitive impairment by HBOT is most likely if treatment begins as soon after the injury as possible. Severe cases may need more than the initial round of treatments to continue improvement and yield the desired outcome. 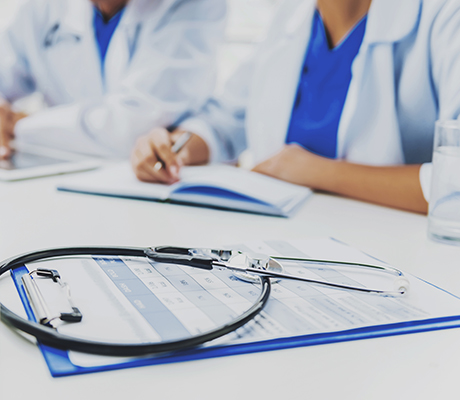 Cyanide poisoning by itself is fairly rare. However, carbon monoxide and cyanide poisoning in combination often manifest in patients with smoke inhalation, forming a strong combined toxicity. Hyperbaric oxygen has been a well researched therapy in these cases. HBOT has the cellular effects described above, and additionally has the benefit of being an antidote for cyanide toxicity which has a high mortality rate if not treated in a timely manner. While sodium nitrite has been indicated for treatment of cyanide poisoning, there is evidence that HBOT is beneficial.

HBOT is the primary therapy for a gas embolism. The mechanism of action is bubble reduction due to increased pressure in a hyperbaric chamber, with the bubble subsequently dissolving in the bloodstream.

Pulmonary barotrauma and gas embolism due to breath holding can occur after an ascent of as little as three feet of water.

In a clinical setting, the most likely cause of an air embolism is a surgical procedure, with accidental introduction of air into the bloodstream. Vascular procedures in particular can lead to bubbles obstructing the circulation, with high morbidity and mortality. Likely causes for VAE are neurosurgery, venous catherization, cervical spine fusing and similar vascular surgeries.

HBOT, in conjunction with surgery and antibiotics, is the standard and preferred treatment approach for clostridial myositis and myonecrosis (gas gangrene). These infections – like cellulitis with systemic toxicity – are caused by anaerobic, spore forming, Gram positive clostridial bacilli. Myositis and gas gangrene are acute, quickly spreading, invasive infections of the muscles and true medical emergencies. They are often caused by contamination after accidents with complex fractures and tissue damage.

Crush injuries are true medical emergencies, which generally include multiple tissues – skin, soft tissues, muscles and bones. Both crush injuries and compartment syndrome respond well to HBOT for two main reasons: HBOT supplies ischemic tissue with much needed oxygen, especially in the early post-injury stage. The secondary effect of HBOT is reduction of edema which is common with these injuries. Without timely treatment – surgery and HBOT – sub-acute and chronic complications commonly include failed skin flaps, soft tissue necrosis, non-union fractures and osteomyelitis. 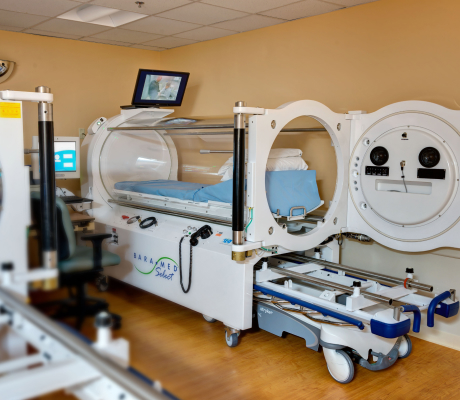 HBOT is a standard adjunct to surgical debridements and antibiotics for necrotizing tissue infections. Patient selection is usually based on the type of tissues involved as well as location of infection. Other factors include the combination of organisms involved in the underlying process, and especially host immunologic and vascular risk factors. In these clinical situations, there appears to be the common denominator of hypoxia developing, resulting in necrosis.

HBOT reduces leukocyte dysfunction in areas of hypoxia and infection and delivers supplemental oxygenation to otherwise ischemic areas. This reduces or halts the range and progression of infection. Oxygen dissolved in plasma is able to reach areas of poorly perfused tissue and thereby supports neovascularization.

Decompression injury is a result of rapid or omitted decompression in ascent from recreational or commercial diving. The resulting expanded gas bubbles in the patient’s circulation are a true medical emergency. Patients may present with clinical symptoms ranging from joint pain, skin rashes, neurological deficits to stroke like manifestations, paralysis and shock. Timely treatment is of the essence, and the main task is to reduce gas bubble size as quickly as possible. The treatment protocol follows well established algorithms and flow charts and should be confirmed by a hyperbaric physician trained and experienced regarding this specific indication. Follow-up dives after the initial treatment table may be indicated to ameliorate long term neuro deficits. Divers Alert Network is a reliable source for additional information.

The staff go above and beyond the call of duty. They have patience, are funny, and are very personable. It makes it a pleasure to go for my treatments. I have claustrophobia and being inside this tube for 2 hours a day is a very difficult task, but these gentlemen ease my anxiety every morning. Upon entering the waiting room they greet me and walk me down to the hyperbaric chamber in a way that makes me feel important. When I am anxious when in the chamber they talk to me and assure me that everything is ok and they are present for me in a way that bolsters my confidence. I cannot say enough about them, they are just wonderful.

From my very first session, I was greeted by a group of wonderful professionals that explained the procedure to me and watched over me while I was in the chamber. The crew always answered my questions patiently and thoroughly. Not only did they see to the clinical aspect of my treatment, but they always checked on my comfort level several times during the treatment. If I requested anything, they always complied quickly and with a smile.

We’re Here To Help. LST is here to any question you may have.

Talk to us
LST Hospital Network
Partners And Affiliates